Robert Leonard, then the director of Artspace wrote, ‘Digital technology is revolutionising the way movies are made. Not only is it invigorating existing forms like the feature film and the music clip, it is also making new kinds of moving-image work possible. Shelley Simpson works in one of these new areas, mixing video recordings and live feeds in real time to create moving-image accompaniments for performances by the techno band Unitone HiFi.

Subduction extends this work into an art gallery context. Simpson took her title from geomorphology, where ‘subduction’ refers to the movement of one of the Earth’s tectonic plates underneath another. In a darkened room, a video wash of abstract monochrome mirror patterns is accompanied by an ambient bass drone. The mirror patterns, reminiscent of the old title sequence from Doctor Who, suggest by turns a watery vortex, heat waves, shadows playing on the wall, animated Rorscharch blots, cross-sections of body or brain. The droning soundtrack is also ambiguous, in turn reassuring and ominous. The viewer can interact, injecting two-second audio-visual samples into the mix using a keyboard. By contrast, these samples are coded as either ‘natural’ and ‘mechanical’, but they also formally cross-reference: the opening of a bud resembles the opening of the circular door of a space station, a spinning reel of magnetic tape echoes a spinning seed.

Overlaying and interweaving sounds and visions, Subduction provides an immersive aporia. Opposites like ‘nature’ and ‘technology’ are subducted, losing their direct oppositional status. Subduction exemplifies rave culture’s promotion of the dissolution of distinctions: between self and community, inside and outside, culture and nature.’

Shelley Simpson’s multi-disciplinary art practice is concerned with exploring the porous boundaries between the binary concepts of nature/culture and human/non-human. She works with materials that reference ecology and materialism, with specific attention given to agency, affect, labour, transformation, cooperation and symbiosis. Her recent projects explore extractive mining practices as a vehicle for examining wider issues. She is the recipient of a Wild Creations grant from CNZ and DOC for 2018 which funded a project based on 19th century tin mining in Stewart Island. Shelley received an MFA (First class honours) from Elam in 2016. In September 2017 she attended the course Posthuman Ethics in the Anthropocene, with Prof. Rosi Braidotti at Utrecht University, The Netherlands.
www.art.shelleysimpson.co.nz

Title: Take care now
Year: 2018
Length: 03:06
Format: Video based installation, double sided projection
Credits: With thanks to Lila and RM Gallery
Take care now uses performance, installation and video navigate the complexities of value and progress in relation to capitalism, and to illuminate the emotional labour present within daily processes of caring. Formed through a porous and durational threshold between art-making and ‘life-living’, Take care now is ultimately concerned with encouraging practices of caring response to encounter. It seeks to set up a consciousness and criticality regarding modes of maintenance, responsibility and privilege within daily interactions, and establishes a necessary change of pace in regards to ‘life-living’. This type of caring is not based in grand gestures, but rather is embedded in the accumulation of caring actions. 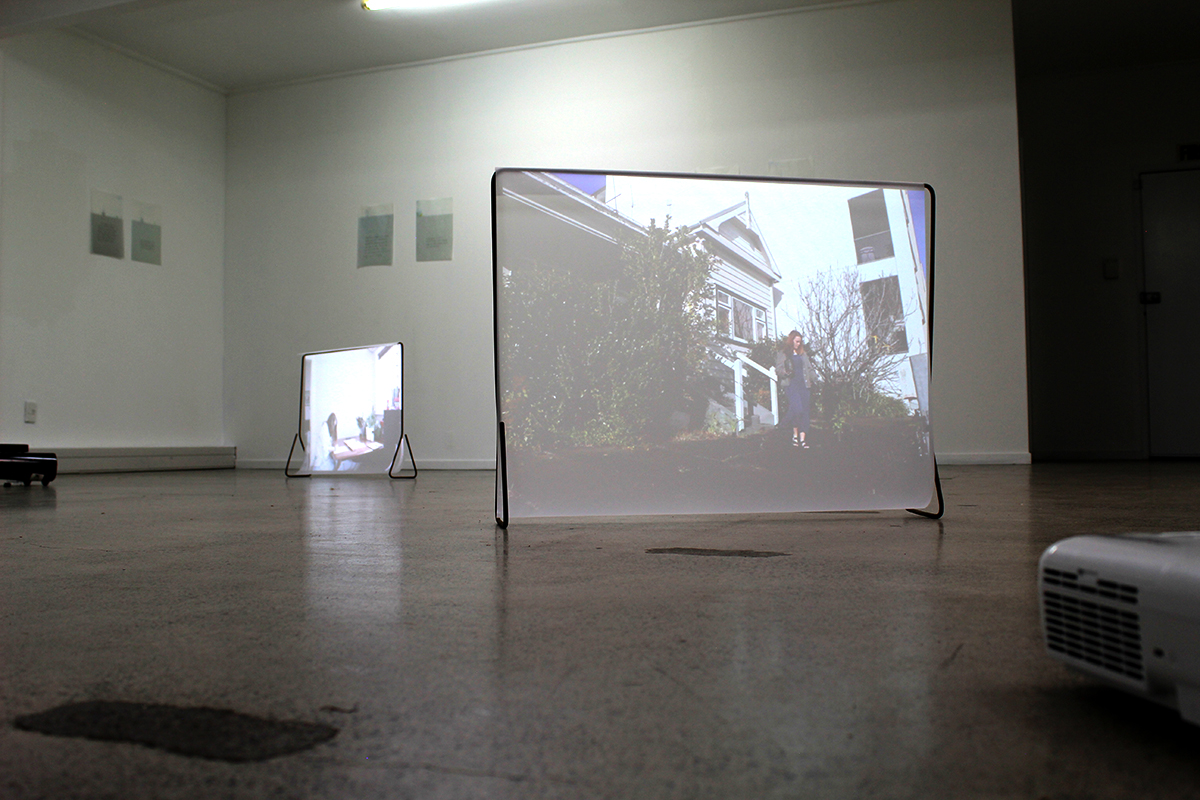 Title: The Entities
Year: 2018
Length: 15.00
Format: Two screen digital video
Credits: Audio: Sarah Callesen, video: Shelley Simpson
Our experience of the world around us is often mediated by technology, contributing to the idea that humans are separate from nature. In The Entities, artists Sarah Callesen and Shelley Simpson use visual and audio relationships between human and non-human, natural and artificial, culture and nature. All recording is subjective, mediated by both humans and technologies used in the process. The Entities considers the role of each player within the communication system, where each offers its own affect.

Simpson has created photographs of forest floor worlds in the temperate bush of Rakiura, Stewart Island – an intense, remote environment mostly devoid of human activity. We generally perceive events that occur at human scale, not too big, not too small. We can extend our perceptual range using technology. Scale shifts, time slows. The images are presented as a two-channel video work scaled up to an immersive size. Subtle animation augments the imagery, bringing attention to the sense of process, of visibility, of observer and of mediation.

In response to the macro imagery, Callesen presents an accompanying sound piece that considers change in sound at a qualitative scale other than loudness. Echo and reverb are tropes often used in film to exaggerate the sound of small things. Natural history documentaries often apply imagined sounds to visual footage, particularly for small fauna such as insects, which are too minute to capture with existing technology. Designed sound in film, television and now virtual environments, continue to fabricate what humans imagine unheard phenomena to sound like. Callesen has used designed planet atmospheres and other constructed sounds sourced from stock libraries, as well as manipulated field recordings taken by both artists.

Shelley Simpson’s images were created with the support of Creative New Zealand Toi Aotearoa and The Department of Conservation Te Papa Atawhai.

Sarah Callesen holds a Postgraduate Diploma in Fine Arts (with distinction) and a Bachelor of Design. Her practice explores a relationship with technology, particularly the mediation of perceptual experience. She works predominantly in the mediums of drawing and sound. Her work has been exhibited as a Merit Award winner in the 2018 Parkin Drawing Prize, as well as a finalist in the 2016, 2015 prize exhibitions. A finalist in the Molly Morpeth Canaday Award (2017), and in the Wallace Art Awards winners and finalists travelling exhibition (2015). The artist had a site specific work in the 2018 Auckland Art Fair ‘Projects’ exhibition, the group show ‘I Understand If You Are Busy’ at RM gallery (2018), and group shows at the George Fraser and Projectspace galleries, Elam School of Fine Arts (2017, 2016).
www.sarahcallesen.com

Shelley Simpson’s multi-disciplinary art practice is concerned with exploring the porous boundaries between the binary concepts of nature/culture and human/non-human. She works with materials that reference ecology and materialism, with specific attention given to agency, affect, labour, transformation, cooperation and symbiosis. Her recent projects explore extractive mining practices as a vehicle for examining wider issues. She is the recipient of a Wild Creations grant from CNZ and DOC for 2018 which funded a project based on 19th century tin mining in Stewart Island. Shelley received an MFA (First class honours) from Elam in 2016. In September 2017 she attended the course Posthuman Ethics in the Anthropocene, with Prof. Rosi Braidotti at Utrecht University, The Netherlands.
www.art.shelleysimpson.co.nz

Jasmine Tuia and Ashleigh Taupaki explore Samoan and Maori concepts of body, space, place-making and the relationships that connect these. Through the use of indigenous Pacific narrative and recordings natural spaces of cultural and personal significance, the va (relational space) becomes evident.

To detect the scent variations in flowers, unscented flowers rotate above a vase which holds a sensor. As the rotating flowers are passed over the smell sensor a computer fan draws their scent past a ceramic bead sensor and a microprocessor measures a voltage dependent on the scent concentration and type. The notes are synthesised in piano voice. The sound changes as the flowers wilt and die. Synopsis: The political and cultural interests of the 1700’s that sent out explorers to collect exotic and rare botanical specimens also created an aesthetic of beauty that embodied the precarious balance of life; one tilt out of balance, one degree of heat, one minute and its gone.
We’re exploring the fragrance of contemporary existence, illusion, and sense-making in a largely visual culture. We’re interested in subliminal odours, airborne particles that affect minds and emotions.

Title: Lucky
Year: 2006
Length: 21:51
Format: Digital
Lucky is a documentary about the making of a fragrance to fortify the lower senses of the gambler playing with chance on pokie machines, which are essentially random number generators. Each perfume bottle is unique as there is a random number generator in the design.
Thematic tags: environment and ecology, technology, affect, olfactory

Title: Pick Up Styx
Year: 2008
Length: 01:04
Format: Interactive software
Credits:
The video interacts with the movements of the players playing a game of pick up sticks which were each fragranced with celebrity perfumes brought to market during the years ofthe war on terror 2001-2008
Thematic tags: politics, history, olfactory, technology, interactive

Raewyn Turner’s interdisciplinary work is concerned with cross-sensory perception and the uncharted territories of the senses. Her works have been shown in numerous national and international exhibitions including Museum of Contemporary Art, LA, Parque de las Ciencias, Granada, Spain, 11th Prague Quadrennial of Scenography and Theatre Architecture 2007,Prumyslovy Palace, Prague, Argentina, Georges Pompidou Center, Te Papa Museum, and Academy of Fine Arts, New Zealand. She has worked with olfaction since 1999 and in collaboration with Dr Richard Newcomb, molecular biologist, NZ. In 2011 she was recipient of a Fulbright Travel Grant for an artists residency at Monell Chemical Senses Center, Philadelphia. Her works include videos, interactive installations, performances, exhibitions and large scale international performance in theatres and stadiums, working as a concept and design artist and lighting designer in collaborations with musicians, orchestras and choreographers.

Title: Shipped
Year: 2013
Length: 03:38
Format: HD Video, ProRes 422
Shipped references the constant passages of container vessels plying the invisible highways of global commerce. Essential to international trade, these vessels carry bulk cargo in order to satisfy the ever-increasing populations need for goods.The sound of the foghorn elicits a warning, a metaphor perhaps for the danger in supporting a continuum in what has become unsustainable growth.

Denise Batchelor is a visual artist based in the far north of New Zealand, where she works primarily in the mediums of video and photography. Through personal encounters within nature and the immediate world around her, Batchelor explores the subject of connection; those moments in time that evoke a sense of kinship and/or empathy. Capturing moments that simultaneously embrace the familiar, yet reflect the overlooked or unnoticed, Batchelor’s work invites contemplation.
“A visual artist since 2008, my methodology is initially driven by a strong sense of curiosity and a deep engagement with the environment and the biodiversity within it”.
Batchelor has exhibited widely in galleries, art centres and festivals, both nationally and internationally. The recipient of artist residencies and art awards, Batchelor graduated MFA (Hons) from Whitecliffe College of Arts & Design, Auckland (2010).

Matilda Fraser (BFA Hons, 2012, Massey University; MFA 2016, Elam) is an artist and writer based in Wellington, New Zealand. Recent shows include The Race Marches Forward on the Feet of Little Children, Blue Oyster, 2018; I digress, Enjoy, 2017; The Eight Hours Plan, Mason’s Screen, 2017; New Perspectives, Artspace, 2016. She was the 2015 Writer-in-Residence at Blue Oyster Art Project Space, Dunedin, producing a series of nested texts entitled Against Efficiency about the nature of criticism.